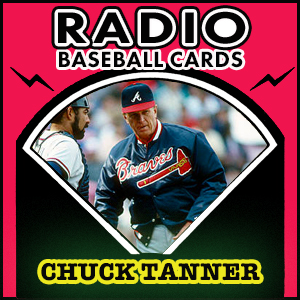 Charles William Tanner (born July 4, 1929 in New Castle, Pennsylvania) is a former left fielder and manager. After spending five seasons as a special assistant to the general manager of the Cleveland Indians, Tanner was named a senior advisor to new Pittsburgh Pirates GM Neal Huntington in the autumn of 2007.

A left-handed batter and thrower, Tanner signed his first contract with the Boston Braves. He played for eight seasons (1955 – 1962) for four different teams: the Chicago Cubs and Los Angeles Angels, as well as the Braves (then based in Milwaukee) and the Indians. In 396 games played, Tanner batted .261 with 21 home runs.

In 1963 he began managing in the Angels’ minor league system, where in 1970 he led the AAA Hawaii Islanders to 98 wins in 146 games and the Pacific Coast League pennant. He then received his first major league managing assignment in 1970 with the Chicago White Sox.

With the White Sox, Tanner managed such star players as Wilbur Wood, Carlos May, Bill Melton, and the temperamental Dick Allen. His most successful season with the Sox came in 1972, when he managed them to a close second-place finish in the American League Western Division behind the eventual World Series champion Oakland Athletics. Tanner managed the Sox until 1975, when he was fired and replaced by Paul Richards.

In 1976, Charles Finley hired Tanner to manage the Oakland Athletics. With speedy players such as Bert Campaneris, Bill North, and Don Baylor, Tanner made the A’s into a running team, stealing a major league-record 341 bases. The A’s, however, lost out in the division race to the Kansas City Royals.

Before the 1977 season, the A’s were in the process of trading off many of their stars of the great team that won three straight championships from 1972-74. Part of the sell-off was the trading of Tanner’s services to the Pittsburgh Pirates for an aging Manny Sanguillen. This was the second instance in major-league history where a manager has been part of a baseball trade (Joe Gordon and Jimmie Dykes were traded for each other in the 1960s; Lou Piniella of the Seattle Mariners was traded to the Tampa Bay Devil Rays almost 30 years later).

He reached the pinnacle of his managerial career in 1979 as the skipper of the World Champion Pittsburgh Pirates. Tanner was well known for his unrelenting optimism, which permeated his teams. The Pirates were able to win in 1979 after falling behind, three games to one in the World Series. Tanner left Pittsburgh after the 1985 season and finished his managerial career with the Atlanta Braves.

He is the father of former major league player and coach Bruce Tanner. In 2006, he was invited to be a coach in the 2006 All Star game by NL manager Phil Garner, who played for the Pirates during Tanner’s tenure as Manager. Prior to the start of the game, Tanner threw out the ceremonial first pitch.

Tanner rejoined the Pirates organization in 2007 as a special advisor to general manager Neal Huntington. Tanner had previously been an advisor in the Milwaukee Brewers and Cleveland Indians organizations. He continues to live in his home town of New Castle.

This episode was originally broadcast as a national radio syndication in August 1987.