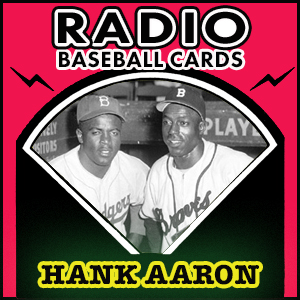 Hank Aaron had a lot of praise and thanks for Jackie Robinson breaking the color barrier during his Hall of Fame acceptance speech in 1982. He shares his memories and experiences with Jackie in this episode.

Henry “Hank” Aaron broke into professional baseball in 1951 for the Indianapolis Clowns. One year later, the 18 year old helped the team with the Negro League’s World Series. One year later, Aaron was playing for the Boston Braves, who later moved to Milwaukee. These were not easy times for black baseball players and Aaron will never forget Jackie Robinson’s contribution to breaking down the color barrier and the impact it had on his life.