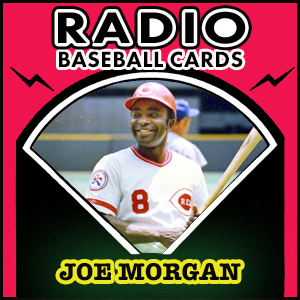 Joe Morgan, with Pete Rose, Johnny Bench, Tony Pérez and Dave Concepción, led the Cincinnati Reds to consecutive championships. Morgan talks about driving in the winning run in Game 7 of the 1975 Series, ranked as one of the greatest World Series ever.

Joe Morgan was signed by the Houston Colt .45’s as an amateur free agent in 1962. Early in his career, Morgan had trouble with his swing because he kept his back elbow down too low. Teammate Nellie Fox suggested to Joe that while at the plate he should flap his back arm like a chicken to keep his elbow up. Morgan followed the advice, and his flapping arm became a familiar sight to baseball fans.

Although Morgan played with distinction with Houston, the Astros wanted more power in their lineup. As a result, they traded Morgan to the Cincinnati Reds as part of a blockbuster multi-player deal on November 29, 1971, announced at baseball’s winter meetings. While the Astros got power-hitting Lee May, the deal is now considered one of the most one-sided trades in baseball history. The deal facilitated a shift in Reds team philosophy towards speed over power, with Morgan and outfielder Pete Rose now two central pieces, batting back-to-back. The trade is now referred to, by one author, as the best trade in Reds history. Conversely, it is considered one of the worst, if not the worst, trades in Astros history. Morgan, along with teammates Pete Rose, Johnny Bench, Tony Pérez and Dave Concepción, led the Reds to consecutive championships in the World Series. He drove in the winning run in Game 7 of the 1975 World Series, now ranked as one of the great World Series of all time.

Morgan was inducted into the Baseball Hall of Fame in 1990 and is currently an Emmy-winning commentator for ESPN television and radio.